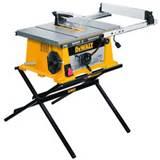 Table saws are a significant source of injuries in the United States and other countries. The SawStop table saw was developed to prevent operators from having their fingers cut off. This safety system stops and lowers the saw blade when it encounters human flesh.

How does the SawStop know when to stop ?

In fact the table saw has a bypass mode that allows it to cut conductive materials, such as metal and wet wood. This mode is deactivated when the saw motor is shut off. However, the operator should check the blade for any remnants of these conductive materials before operating the saw again.

The operator can use the bypass mode to determine if a particular material would have caused the safety system to activate under the normal mode. However, after any testing session has been completed, the saw motor should be shut off.

How is the saw blade is stopped and lowered ?

Activation of the safety system causes the following actions:

• An aluminum brake is forced into the spinning blade, causing it to stop.
• There are angular momentum resulting from the blade being stopped forces the blade under the cutting table.
• The electrical power to the saw motor is disconnected.

Actions after the saw blade has been stopped

Video of a SawStop in action

The following website has a video showing the operation of a SawStop table saw.

Presently there are four(4) types of these table saws available for purchase. These types range from an industrial cabinet saw at the high-end to a portable contractor saw at the low-end. Each type of saw is available in a range of prices, depending on the power of the saw motor and other features.

Future of the SawStop Table Saws

These table saws have been accepted by the market even though they are priced at the high-end. They are recognized as high-quality table saws. However, a potential competitor has developed a different type of safety device. The Whirlwind Tool Company claims that its prototype device can stop the saw blade before it encounters human flesh.

Another potential problem is that the US government may eventually enforce some type of safety features on table saws. If this happens, SawStop may be able to license its safety system to other manufacturers of table saws.

Therefore, the future of SawStop may not be known until more time passes and the various uncertainties have been resolved.